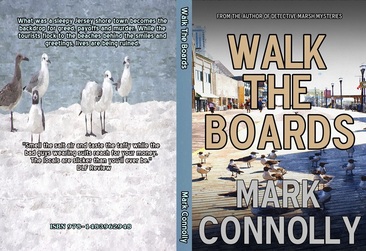 "Smell the salt air and taste the taffy while the bad guys wearing suits reach
for your money.  The locals are slicker than you'll ever be."   DLF Review

The attractive blonde-haired woman of thirty-two years climbed down from her shiny, over-sized luxury SUV and walked towards the entrance of the convenience store.

"Mighty pretty truck you got there miss," came a voice from the dark side of the parking lot. She walked faster ignoring the stranger's comment.

"Hey what up, don't you speak English, bitch!" Suddenly there were three aggressive looking teens in her path. As she tried to maneuver around them she found herself surrounded by four more of the gang members. When she started to scream out she felt a punch to her right temple and then one to her nose. Her world was spinning out of control while she fought as hard as she might but could not repel the over-whelming force of her attackers. The last thing she remembered was that her shoes were off and her skirt was being removed but by then, out of injuries and fear, she blacked out.

When she crawled out from behind the garbage dumpster two hours later, she was naked from the waist down and was bleeding from her mouth and nose. Her body in general was a series of burning scrapes and contusions. She tried to steady herself by clawing her way up the side of the large blue garbage dumpster but fell back to the ground with her face smacking the inflexible asphalt surface. A police patrol officer pulled his blue and white cruiser into the parking lot for a coffee stop around midnight and spotted the woman's crumbled body sprawled on the ground.

After EMS stabilized her, she was carried off to Washington Hospital. The patrol officer, with several back-up Toms River Police units, canvassed the customers and staff, but to no avail. The gang had left as swiftly and silently as they had arrived. The video surveillance system was a typical, cheap, scratchy black and white blur, useless to any police investigation.

"What in the hell is going on? You people are letting me, the township and yourselves down," shouted the Chief. "We look like bumbling amateurs!" It was another of the all too frequent emergency staff meetings called after every gang incident. This was the fourth meeting for December and the seventh in two months.

"Chief everyone has postponed vacations and personal time to work extra shifts. We have turned over every rock in all forty-two square miles of township. It's like the little bastards are freaking invisible," remarked Sgt. Wetter.

"I know guys and I appreciate your efforts but we have to catch at least one of these snotballs or we all will be looking for new jobs. The useless politicians can't agree on hardly anything but they are all unified that this problem must go away and soon! Aside from the residents, the town leaders are worried about the black-eye we are getting statewide in the media along with the millions of tourist dollars that will be going down the drain if we don't get a handle on this problem," explained Chief Kingston. "We never had a need for a formal Gang Unit, but we are forming one now! Those assigned to it will be notified shortly. Someone has to know one of these punks! Sgt. Horn, when you go to the schools to interview kids for the drug awareness program, see if you can get any kind of lead."

"Sure thing Chief, but I doubt these vermin are attending school on a regular basis then are playing week-end gangsters," said Horn.

"Yeah, I know, but at one time they had to attend school somewhere, hell they aren't ghosts, someone must see them every day."

"Chief these are not your usual gang types. They don't flash gang signs or colors. They don't try to terrorize people or other gangs, they don't show a pride in being a member like most of the gangs around New Jersey today. These guys are strictly in it to make money, rape and stay hidden. It doesn't fit, it's not a tough guy thing so much as they have some plan or objective, or are being controlled by someone!" explained Sgt. Horn.

"See what happens when you blow your own horn," wisecracked Wetter. The room filled with groans and chuckles from the police staff members.

The woman could not speak, her larynx had been bruised and she could not focus her eyes well enough to see the man's features, but she was reassured when she felt his metal police badge. "I know you won't be able to speak for several more weeks yet," said Chief Kingston, "And I know you can't see too well, but you must understand you are our only witness, the faster we get a line on this scum the better. Most of the victims of this gang are either dead or severely traumatized. The prior attack before you was a mother and her three daughters. Two of the teenage girls died from their injuries, the youngest girl has totally blanked out her mind about everything that happened and the mother never got a clear look at her attackers."

"I need you to try to answer my questions by writing on this erasable white board. Just take your time and try to form your letters slowly. Printing will feel strange, but will most probably be the easiest for me to decipher."

The dedicated cop worked with the woman several hours a day for over two weeks. She was able to give information about the assault and a description of three of her attackers. As a tenth grade school teacher at TR North, she was able to accurately give the ages of the teenage boys and young adults.

Three days later immediately after Kingston entered his office, "Chief we have flooded the schools in the entire county with descriptions of the three teens. We got a possible hit on one of the older boys. A one, Michael Rolster, now about 18, last known address was his parent’s house over on Constance Road."

"OK, Wetter, let's rock and roll." It was a short drive from police headquarters with Wetter at the wheel. As they pulled up to the 1960's vintage ranch house in the old working class neighborhood, they could see it had not been inhabited for many years. Still they trudged across the lawn scattered with various rubbish which poked through the recent light coating of snow. Stopping by the front picture window the two cops cupped their right hands to block the glare and peered into the deserted home.

A quick canvass of the current surrounding residents told them the Rolsters had moved to Florida when the old man retired. They learned that the son Michael was always in trouble and had run away so many times, the parents just left town without him. Later investigation revealed the boy had actually been in reform school up in the northwestern part of the state when the parents had moved. Mr. Rolster died from lung cancer the year before and the wife was in a nursing home down in Georgia, suffering from advanced Alzheimer's. The boy had walked away from the Clinton juvenile detention facility one day and was never seen again. Once again they faced a dead-end trying to locate the savage street gang. As the weeks passed a hard winter set upon the township, the gang attacks had apparently stopped for the season and their trail went as cold as the snow that fell on the frozen ground.