The world as we know it almost ended in 2007-08 due to financial failure. If it had
happened America would have been on its knees, then the world would have
followed. Imagine having all the technology but no place to plug it in. Could
Americans live off the grid and rebuild the country?
​Would they make the same mistakes?

"This could be where we are headed and it's damn scary. The
characters are strong and so is the story." DLF Reviews

"Not so much a what if, but a when it happens. Good story." Review By Edgar 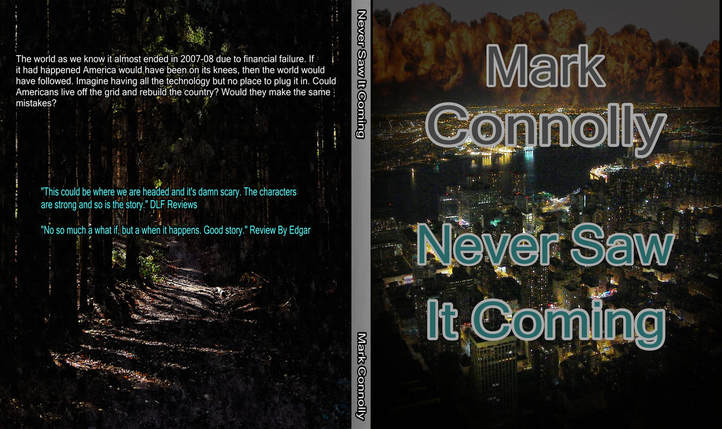 America as it was know collapsed under the weight of unsustainable corporate practices and government officials who put swelling their pockets before the needs of its people. The world soon followed watching financial markets and manufacturing disappear. With no infrastructure, millions of electronic devices lay idle and the people were forced to live off the grid. Many did not survive.

In the latter 20th and the beginning of the 21st centuries hundreds of religious groups flourished especially in the south and western United States. Many of these factions were simply cults using Christianity as a base. The premise being the world was or more exactly organized civilization was about to collapse and to protect themselves they sought the secluded life behind walled compounds.

One such typical cult saw a woman who endured beating and rapes rise to power. Fighting against the established norm of old white men using the bible to exploit their passions, that of raping fourteen-year-old girls and having everyone fear the words of the Prophet. Sarah became the new prophet and changed how the people were treated.

Fearing the government, she amassed a cache of weapons hidden in several locations about the country and instilled in her son that he would someday have to do battle to protect their followers. It was ridiculous considering the might of the American military but when everything collapsed and the military dissolved then Sarah's army became the most powerful in America. After she died her son stood ready to carry out the promises he made to his mother.

Just prior to the collapse several men and a few women had taken to the road for self preservation and to record the events that they saw in their journeys. These mobile scribes were referred to as Travelers. Their neutrality often gave them safe passage into the various regional borders that had formed around America after the breakdown.

This is the story from the recounting of John, best known as Traveler John. A being left to roam amid the ruins of a country destroyed from within by bigotry, greed and triviality. One who had witnessed the horrors of human self-indulgence and gluttony, who had seen people gather for survival in an attempt to rekindle hope lost under the avalanche of lies, decadence and betrayal. He was one of the few in a position to write down the story as it happened. He could attest to the following facts as they unfolded, the bits of truth that are always lost in the recording of any history of human existence. You can ignore his story and drift off into disillusionment by yourself, but he needed to keep walking or sit down and die.

People of America were being shunned more each passing year, the rest of the world had grown weary of their constant denial of truth. After a series of incompetent and arrogant leaders in Congress and the White House, America had begun a twenty-five-year period of isolationism. After completion of the walls on the southern and northern borders, began the reclamation era. Imports from China and most of the outer world having been banned, American manufacturing had blossomed for a while, technological advancements soared.

Self reliance appeared to work for all the people, but as usual, mostly for the wealthy, still the 99% plodded along in their daily working world to be treated to their one day off per week. Sunday had once again become a day of rest as the Christians ruled the entire United States. Not one store was allowed to be open on Sunday. Other than police and hospitals, the streets were practically deserted unless one was visiting a friend or relative's house. This all seemed to work well until the rest of the world clamored for the technology coveted by the Americans. This of course led to traitors of the time selling off the products overseas and the wealthy leaking the manufacturing secrets to foreign governments. Despite this inevitable human flaw, it could not dent the thousands of advancements made annually. The real reason for the downwards spiral began with the people themselves. They had become so dependent on electronic devices from mandatory chips implanted in every human, dog and cat to the fully "smart homes" they lived inside.

Thinking that corporations were helping them to lead more efficient lives when the reality was not only government interference but just ordinary corporations were seeing inside every home in America. They gathered data regarding what foods where eaten, what internet site visited, movies and TV programs were being watched, but of course no one would admit it was happening. Thousands of individuals gained knowledge of the sexual habits and perversions that took place on every street in the United States. Anything not considered Christian was met by para-military police agencies bursting into a citizen's home in the middle of the night and taking the occupants away, never to be seen again.

In the so called advanced society it came to be realized that sexual urges could not be denied, so to this end prostitution was made legal in all fifty states. It was severely restricted to special remote locations and the captured citizens guilty of sexual perversions, were given second chances at life by providing these same services to the general public. Those too old to be of use were executed as being part of the war on Christians. The children of these families were sent to Christian schools for re-indoctrination.
American had begun to fail not by the terrorists outside the United States but by the internal terrorists from within her isolated walls. Society had begun its dumb down phase, leaders spend their time enjoying life instead of doing their jobs, it was no surprise at all to the remaining persons of intellect that the collapse was on the horizon.
​
Traveler's first entry tells of a great leader groomed for years to assume the position of power. As he stood on the hilltop peering down towards his enemy, Tubaloth knew this was to be the final battle, it would once and for all unite the fragmented home he knew as America. Casting off the depraved disinterest that had destroyed the nation. It was for the people he loved and fought for all these years. To finally banish the pettiness and bigotry that had shattered the land and brought about years of war and suffering, he held the answer in his right hand, the sword of justice, the sword of knowledge, the sword of peace.
Yet in that moment he could only think of his mother and everything that she had sacrificed to get him to this point in time. Would he let her down? Failure would certainly mean death and all would be lost forever. Could fate let down the greatest leader in man's history, after all he was the only chance for there to be more history. His fear grew as he remembered her teachings, had he learned his lessons well enough to accomplish this final test. If he was successful had he the further courage to move the survivors of the country into a position of safety and growth. Could he win this final clash and yet lose the entire project afterwards by not being earnest enough to finish the planning and details of the restructuring? For if he let the archaic celebration of victory cloud his mind he might misplace sight of the main purpose, bringing America back from the pit of destruction.
When the world financials markets and governments crashed only those who could command respect were able to try and seize whatever they could of the remaining resources. Being on a somewhat equal footing with regard to food and water there came a division of the American territories.